I’m a big fan of mind mapping for putting together random thoughts and ideas in a logical hierarchy.

If you’ve ever been taught to formulate ideas in an outline format with Roman numerals (perhaps back in grade school like I learned), purge that methodology from your memory.

Mind mapping is where the real creative process begins!

For the past three years I have been using iThoughtsHD on my iPad. It is very robust and the developer, ambulance Craig Scott, mind does a great job adding useful features to make the software work optimally. Earlier in 2013, he released a Mac desktop version called iThoughtsX that works great with the iOS apps when you sync all mind map files on Dropbox. No matter which device you are using, whether an iPhone, iPad or the Mac, you can pop into an mind map, edit it, and it will sync with all the other devices.

In late December, however, I discovered an amazing new mind mapping software that is perfectly suited to ad hoc mind mapping on an iPhone. It is called Mindly. I would not say that it comes close to replacing iThoughtsHD as a main mind mapping software, because the maps can only be exported as image files and as PDFs…but it is due to the simplistic nature of the app’s design that make it so awesome for mind mapping on the iPhone. 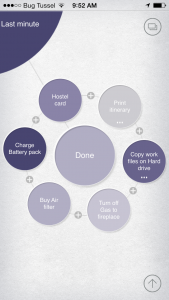 Above is a use-case how I used Mindly to create a last minute “to do” list for my trip to Europe. It is very intuitive to use. When you have more than six nodes to a mind maps, the view shifts. the central point moves to the bottom-right and all sub-nodes “orbit” around it. This functionality makes it really easy to view a complex structure on a small device like an iPhone.

Because I used Mindly as an ad hoc task list, I created one sub-node and labeled it as “done”. Whenever I completed a task, I dragged and dropped it into the “done” circle. It made it very easy to view what was still pending in my to do list.

I do not know who created the Mindly app, but I would like to shake their hand and buy them a beer. It is an extremely slick iPhone app that works wonderfully well on an iPhone.